20 of Our Titles Longlisted for 2019 Carnegie Medals for Excellence 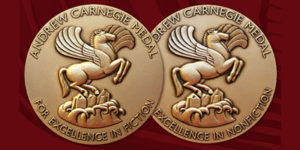 The 2019 Carnegie Medals for Excellence six-title shortlist—three each for the fiction and nonfiction medals—will be announced on October 24.

The two medal winners will be revealed at the Reference and User Services Association’s Book and Media Awards (BMAs) event at American Library Association (ALA) Midwinter Meeting in Seattle on January 27, 2019.