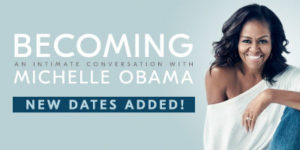 After a highly successful 2018 12-event arena tour across 10 cities, Live Nation and Crown Publishing are pleased to announce that additional dates and cities have been added to “BECOMING: An Intimate Conversation with Michelle Obama.” Click here for a video compilation from Mrs. Obama’s tour thus far.

This extension of the tour will include 21 events in 2019 across North America and Europe produced by Live Nation, including 11 additional events in the U.S., 4 in Canada, and 6 in Europe. The 2019 events will kick off on February 8 in Tacoma, WA, and will make stops in previously unvisited cities, including Austin, Toronto, Atlanta, Copenhagen, Amsterdam, and more. The European dates will include an event in Paris, rescheduled from the original December 5, 2018, date which was delayed due to Mrs. Obama’s trip back to the U.S. to attend the late President George H.W. Bush’s funeral. The 2019 events will also see Mrs. Obama visiting a range of venues, from arenas to more intimate theaters. Each stop will feature to-be-announced moderators who will appear in conversation with the former First Lady. The final event will take place on May 12 in Nashville, TN, concluding the Becoming book tour.

Mrs. Obama is dedicated to ensuring tickets are put into the hands of real fans, and not resold on secondary websites. That is why Live Nation and European ticket agencies are implementing various methods to limit ticket scalpers on the Becoming book tour. The North American events will utilize Ticketmaster’s Verified Fan® platform. Fans can register now through Wednesday, December 12, at 10 p.m. PST HERE for the Verified Fan presale. Registered fans who receive a code will have access to purchase tickets for the North American events before the general public on Friday, December 14, from 10 a.m. local time to 10 p.m. Information on the ticketing methods for the European events is available at each city’s respective ticketing website.

Tickets for the newly announced North American 2019 dates will go on sale to the general public beginning Saturday, December 15, at 10 a.m. local time at BecomingMichelleObama.com. A limited number of VIP meet and greet packages with the former First Lady will also be available.

In keeping with her commitment to make her events accessible to as many people as possible, Mrs. Obama and Live Nation will donate a portion of ticket inventory in each market to various organizations, including, but not limited to, charities, schools, and community groups in each city the tour visits. Those fans will receive free admission to the tour stop in their city.

Attendees at Mrs. Obama’s events will hear her honest reflections on the experiences and events, both public and private, that have shaped her, from her childhood on the South Side of Chicago to her years as an executive balancing the demands of motherhood and work, to her years spent at the most famous address in the world. Michelle Obama has emerged as one of the most iconic and compelling women of our era. As First Lady of the United States – the first African-American to serve in that role – she helped create the most welcoming and inclusive White House in history, while also establishing herself as a powerful advocate for women and girls in the U.S. and around the world.

“I couldn’t be more excited to visit even more cities across the country and around the world,” Mrs. Obama said. “I’ve been so humbled by the response to the tour thus far and the overwhelming interest we’ve received from so many communities we weren’t able to visit this year. That’s why I’m thrilled that we’re able to expand our conversations to these new settings and wider audiences. I can’t wait to continue the discussions that have been so meaningful for me and, I hope, for so many others.”

BECOMING was released on November 13 in the U.S. and Canada by Crown Publishing, a part of Penguin Random House, as well as in 33 languages around the world. Since its publication, BECOMING became an instant #1 New York Times bestseller after one week of sales, and has sold more than 3 million units in all formats and editions in the U.S. and Canada. According to NDP BookScan data, the hardcover edition of BECOMING has sold more copies than any other book published in the United States in 2018. After six printings, the hardcover edition of BECOMING will have 3.8 million copies in print in the U.S. and Canada and a total of 6 million copies in print worldwide. The book is also a #1 bestseller in 11 other countries around the world. An audio edition of the book, read by Mrs. Obama, is also available in digital and physical formats by Penguin Random House Audio.