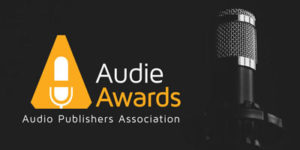 THE GREATEST LOVE STORY EVER TOLD by Nick Offerman and Megan Mullally, read by the authors, produced by Sarah Jaffe (Penguin Audio)

Congratulations to all of our award-winning audiobook authors, narrators, producers and publishers.