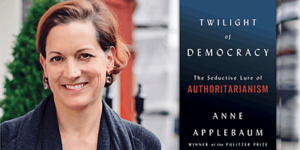 Anne Applebaum, author of TWILIGHT OF DEMOCRACY (Doubleday), will be in conversation with Jacob Weisberg at a United Nations Association of New York virtual book talk hosted by McNally Jackson via Zoom on Tuesday, July 21 at 1:00 pm (ET).

A Pulitzer Prize–winning historian explains, with electrifying clarity, why elites in democracies around the world are turning toward nationalism and authoritarianism. Elegantly written and urgently argued, TWILIGHT OF DEMOCRACY is a brilliant dissection of a world-shaking shift and a stirring glimpse of the road back to democratic values.

Anne Applebaum is a staff writer for The Atlantic and a Senior Fellow of the Agora Institute at Johns Hopkins University. Her previous books include Iron Curtain, winner of the Cundill Prize and a finalist for the National Book Award, and Gulag, winner of the Pulitzer Prize for Nonfiction and a finalist for three other major prizes. She lives in Poland with her husband, Radek Sikorski, a Polish politician, and their two children.