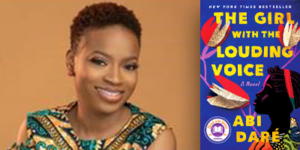 Join author Abi Daré, along with Read with The Ivy co-hosts Emma Snyder and Marion Winik, to discuss Daré’s debut novel THE GIRL WITH THE LOUDING VOICE (Dutton) via Zoom on Tuesday, April 21, at 4:30pm (ET).

THE GIRL WITH THE LOUDING VOICE is a powerful, emotional debut novel told in the unforgettable voice of a young Nigerian woman who is trapped in a life of servitude but determined to fight for her dreams and choose her own future.

Abi Daré grew up in Lagos, Nigeria and has lived in the UK for eighteen years. She studied law at the University of Wolverhampton and has an M.Sc. in International Project Management from Glasgow Caledonian University as well as an MA in Creative Writing at Birkbeck University of London.