Ace Atkins in a Virtual Conversation with J. Todd Scott via Facebook Live (7/15) 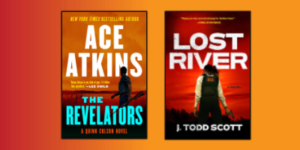 In Atkins’ THE REVELATORS, Quinn Colson returns to take down a criminal syndicate that has ravaged his community, threatened his family, and tried to have him killed.

Scott’s LOST RIVER is a blistering crime novel of the opioid epidemic–and its cops, villains, and victims–written by a twenty-five-year veteran of the DEA.

Ace Atkins is the New York Times bestselling author of the Quinn Colson novels, the first two of which, The Ranger and The Lost Ones, were nominated for the Edgar Award for Best Novel (he also has a third Edgar nomination for his short story, “Last Fair Deal Gone Down”). In addition, he is the author of several New York Times bestselling novels in the continuation of Robert B. Parker’s Spenser series. Before turning to fiction, he was a correspondent for the St. Petersburg Times, a crime reporter for the Tampa Tribune, and, in college, played defensive end for the undefeated Auburn University football team (for which he was featured on the cover of Sports Illustrated).

J. Todd Scott has been a federal agent with the DEA for more than twenty years, working cases investigating international maritime smuggling, domestic meth labs, and Mexican cartels. He has a law degree from George Mason University and is a father of three. A Kentucky native, he now resides in the Southwest, which provided the backdrop for The Far Empty.