Ace Atkins in Virtual Conversation with C.J. Box via Crowdcast (7/16) 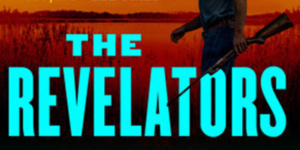 Ace Atkins, author of THE REVELATORS (Putnam), will be in conversation with fellow Putnam author C.J. Box at a virtual event hosted by Books-A-Million via Crowdcast on Thursday, July 16 at 5:00 pm (ET).

In Atkins’ THE REVELATORS, Quinn Colson returns to take down a criminal syndicate that has ravaged his community, threatened his family, and tried to have him killed.

Ace Atkins is the New York Times bestselling author of the Quinn Colson novels, the first two of which, The Ranger and The Lost Ones, were nominated for the Edgar Award for Best Novel (he also has a third Edgar nomination for his short story, “Last Fair Deal Gone Down”). In addition, he is the author of several New York Times bestselling novels in the continuation of Robert B. Parker’s Spenser series. Before turning to fiction, he was a correspondent for the St. Petersburg Times, a crime reporter for the Tampa Tribune, and, in college, played defensive end for the undefeated Auburn University football team (for which he was featured on the cover of Sports Illustrated).