Amity Gaige In Conversation with Lauren Groff via Crowdcast (5/2) 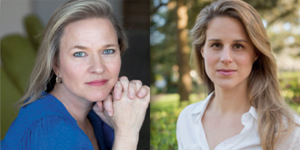 Amity Gaige, author of SEA WIFE (Knopf), will in conversation with Lauren Groff, author of FLORIDA (Riverhead), at a virtual event hosted by Politics & Prose via Crowdcast on Saturday, May 2, at 6:00pm (ET).

SEA WIFE is a transporting novel about marriage, family and love in a time of unprecedented turmoil. It is unforgettable in its power and astonishingly perceptive in its portrayal of optimism, disillusionment, and survival.

Gaige is the author of three other novels, O My Darling, The Folded World, and Schroder, which was short-listed for the Folio Prize in 2014. Published in eighteen countries, Schroder was named one of best books of 2013 by The New York Times Book Review,The Huffington Post, Washington Post, The Wall Street Journal, Kirkus Reviews, The Women’s National Book Association, Cosmopolitan, Denver Post, The Buffalo News, The Millions, Amazon, Bookmarks, and Publisher’s Weekly, among others. Gaige is the recipient of many awards for her previous novels, including Foreword Book of the Year Award for 2007; and in 2006, she was named one of the “5 Under 35” outstanding emerging writers by the National Book Foundation. She has a Fulbright and a Guggenheim Fellowship, and residencies at MacDowell and Yaddo. Her work has appeared in The Guardian, The New York Times, the Literary Review, The Yale Review, and One Story.