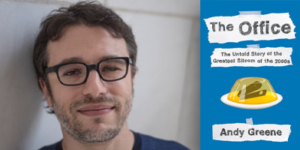 Andy Greene presents his new book, THE OFFICE: The Untold Story of the Greatest Sitcom of the 2000s (Dutton) in conversation with The Washington Posts’s Geoff Edgers, author of WALK THIS WAY: Run-DMC, Aerosmith, and the Song that Changed American Music Forever(Blue Rider Press), hosted by Midtown Scholar Bookstore, via Crowdcast on Tuesday, April 21 at 6:00pm (ET).

Hilarious, heartwarming, and revelatory, THE OFFICE gives fans and pop culture buffs a front-row seat to the phenomenal sequence of events that launched The Office into wild popularity, changing the face of television and how we all see our office lives for decades to come.

From Cleveland, Ohio, Andy Greene graduated from Kenyon College and is now a senior writer for Rolling Stone, where he’s worked for the past fifteen years. He’s written cover stories about Radiohead and Howard Stern and feature articles about Bill Withers, Nathan Fielder, Steve Perry, Pete Townshend, Stephen King, and many others. He lives in Brooklyn.