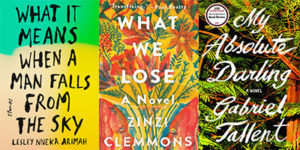 The National Book Critics Circle has announced the finalists for the 2017 John Leonard Prize, which honors the first book in any genre, with Penguin Random House imprints publishing three of the six nominated titles:

WHAT WE LOSE by Zinzi Clemmons (Viking)

This year’s Leonard Prize winner will be selected by an NBCC judging panel and announced in January with the finalists in the other 2017 NBCC Award categories, and presented at the NBCC Awards Ceremony at The New School in Manhattan on March 15, 2018.