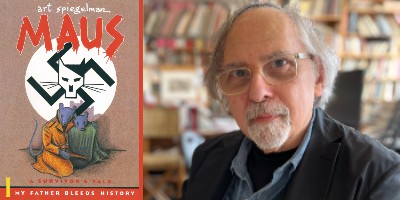 The National Book Foundation will award Art Spiegelman with the 2022 Medal for Distinguished Contribution to American Letters (DCAL). Spiegelman is the first comic artist to receive the DCAL medal, which will be presented to him by author Neil Gaiman at the National Book Awards Ceremony on November 16, 2022.  “Art Spiegelman has captured the world’s imagination through the comics medium,” David Steinberger, chair of the National Book Foundation’s board of directors, said in a statement released Friday. “His masterful graphic novels tackle and illuminate topics from the Holocaust to the aftermath of 9/11, alongside the personal intimacy of the people, events, and comics that shaped him as an artist. Spiegelman’s groundbreaking work has shown us the limitless possibilities for comics as a literary arts form.”

Born in Stockholm in 1948, Spiegelman began studying cartooning in high school and drawing professionally at age sixteen, before joining the underground comics movement in the 1960s. Spiegelman taught history and the aesthetics of comics at the School of Visual Arts in New York from 1979 to 1986, and in 1980 he founded RAW, the acclaimed avant-garde comics magazine, with his wife, Françoise Mouly. Today, he is best known for his Pulitzer Prize-winning graphic novel, MAUS, a two-volume genre-bending retelling of his parents’ survival as Polish Jews during the Holocaust. Earlier this year, the graphic novel landed the comic artist in headlines nationwide when a Tennessee School Board unanimously voted to ban MAUS. Resounding backlash to the controversial move was perhaps most evident in the increased demand for the graphic novel.

Art Spiegelman is one of the world’s most admired and beloved comic artists; to date, honors Spiegelman has received include induction into the Will Eisner Hall of Fame and the Art Director’s Club Hall of Fame. In 2005, he was named one of Time magazine’s 100 Most Influential People. He was made an Officier de l’Ordre des Arts et des Lettres in 2007, and in 2011 he was awarded the Grand Prix at the Angoulême International Comics Festival. In 2015, he was elected to the American Academy of Arts and Letters, and in 2018 he became the first comic artist to receive the Edward MacDowell Medal. His art has been exhibited at museums throughout the world, including the Pompidou Center in Paris, the Ludwig Museum in Cologne, the Vancouver Art Gallery, the Jewish Museum in New York City, and the Los Angeles Museum of Contemporary Art.

Born in Stockholm in 1948, Spiegelman began studying cartooning in high school and drawing professionally at age sixteen, before joining the underground comics movement in the 1960s.…