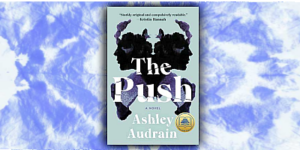 Ashley Audrain will be in conversation about her debut novel, THE PUSH (Pamela Dorman Books/Viking), with author Laura Zigman at a virtual event hosted by the Blue Willow Bookshop via Zoom on Wednesday, January 13 at 8:00 pm (ET).

THE PUSH, a Good Morning America Book Club pick, is a tense, page-turning psychological drama about the making and breaking of a family—and a woman whose experience of motherhood is nothing at all what she hoped for—and everything she feared.

Ashley Audrain previously worked as the publicity director for Penguin Books Canada. Prior to Penguin, she worked in public relations. She lives in Toronto, where she and her partner are raising their two young children. THE PUSH is her first novel.

Laura Zigman is the author of Animal Husbandry (which was made into the movie, Someone Like You, starring Hugh Jackman and Ashley Judd), Dating Big Bird, Piece of Work and Her. She has been a contributor to The New York Times, The Washington Post, and The Huffington Post, produced a popular online series of animated videos, Annoying Conversations, and was the recipient of a Yaddo residency.