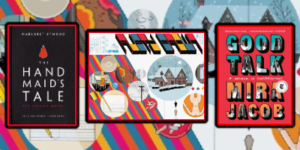 Comic-Con has announced the nominations for the 2020 Will Eisner Comic Industry Awards, with Penguin Random House authors earning nominations in six categories. Named for the pioneering comics creator and graphic novelist Will Eisner, the Eisner Awards are considered the “Oscars” of the comic book industry.

Margaret Atwood’s THE HANDMAID’S TALE: The Graphic Novel (Nan A. Talese/Doubleday) adapted and illustrated by Renee Nault, was nominated for Best Adaptation from Another Medium.

Congratulations and good luck to our authors and illustrators, as well as their editors and publishers.

Voting for the Eisner Awards is held online, and the ballot is available at www.eisnervote.com. All professionals in the comic book industry are eligible to cast votes. The deadline for voting is June 18. The results will be announced in July (date to be determined).