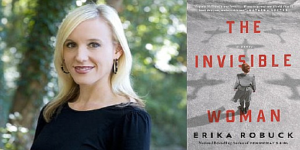 Join FoxTale Book Shoppe for a virtual author talk event with Erika Robuck in conversation with Allison Pataki. They will be discussing Robuck’s latest novel, THE INVISIBLE WOMAN (Berkley) via Zoom on Tuesday, February 23 at 6:30 pm (ET).

THE INVISIBLE WOMAN is a gripping historical novel based on the remarkable true story of World War II heroine Virginia Hall. In France, March, 1944, Hall wasn’t like the other young society women back home in Baltimore—she never wanted the debutante ball or silk gloves. Instead, she traded a safe life for adventure in Europe, and when her beloved second home is thrust into the dark days of war, she leaps in headfirst. Once she’s recruited as an Allied spy, subverting the Nazis becomes her calling. But even the most cunning agent can be bested, and in wartime trusting the wrong person can prove fatal. Virginia is haunted every day by the betrayal that ravaged her first operation, and will do everything in her power to avenge the brave people she lost.

Erika Robuck is the national bestselling author of Receive Me Falling, Hemingway’s Girl, Call Me Zelda, Fallen Beauty, and The House of Hawthorne. She is a contributor to the anthology Grand Central: Original Stories of Postwar Love and Reunion and to the Writer’s Digest essay collection, Author in Progress. In 2014, Robuck was named Annapolis’ Author of the Year, and she resides there with her husband and three sons.

Allison Pataki is the New York Times bestselling author of The Queen’s Fortune, The Traitor’s Wife, The Accidental Empress, Sisi: Empress On Her Own, Where the Light Falls, as well as the nonfiction memoir Beauty in the Broken Places and two children’s books, Nelly Takes New York and Poppy Takes Paris. Her novels have been translated into more than a dozen languages. A former news writer and producer, Pataki has written for The New York Times, ABC News, HuffPost, USA Today, Fox News, and other outlets. She has appeared on Today, Fox & Friends, Good Day New York, Good Day Chicago, and MSNBC’s Morning Joe. Pataki graduated cum laude from Yale University with a major in English and spent several years in journalism before switching to fiction writing. A member of the Historical Novel Society, she lives in New York with her husband and family.