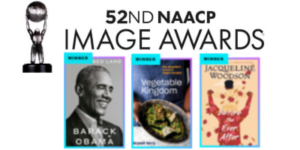 The 52nd NAACP Image Awards, annually honoring the accomplishments of BIPOC artists across television, music, film and literature, are being presented in a novel manner this year. Each day, beginning on Monday, March 22, groups of winners are being revealed online leading up to a live ceremony broadcast across all ViacomCBS Networks, including BET, CBS and MTV, on Saturday, March 27, at 8:00 p.m. (ET).

Awards for Outstanding Literary Works were announced March 22, with three books published by Penguin Random House winning in these categories:

Congratulations to Mr. Obama, Mr. Terry, and Ms. Woodson, their publishers and editors.