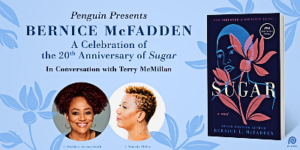 In celebration of the release of the 20th anniversary edition of SUGAR (Plume), author Bernice L. McFadden will engage in a virtual conversation with author Terry McMillan via Zoom on Thursday, July 16 at 8:00 pm (ET).

SUGAR, with a New Foreword by Kimberly Elise in the 20th anniversary edition, brings a Southern African-American town vividly to life, with its flowering magnolia trees, lingering scents of jasmine and honeysuckle, and white picket fences that keep strangers out—but ignorance and superstition in. To read this novel is to take a journey through loss and suffering to a place of forgiveness, understanding, and grace.

McFadden is the author of nine critically acclaimed novels, including Sugar, Loving Donovan, Nowhere Is a Place, The Warmest December, Gathering of Waters (a New York Times Editors’ Choice and one of the 100 Notable Books of 2012), and Glorious, which was featured in O, The Oprah Magazine and was a finalist for the NAACP Image Award. She is a three-time Hurston/Wright Legacy Award finalist, as well as the recipient of three awards from the BCALA. McFadden lives in Brooklyn, New York.