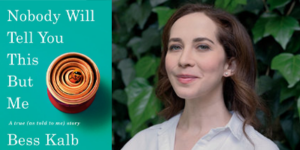 Bess Kalb, author of NOBODY WILL TELL YOU THIS BUT ME: A True (As Told to Me) Story (Knopf), is participating in the Temple Beth Israel Sunday Morning Seminar, as part of the Young Moms Group, moderated by Lori Sagarin, followed by audience Q&A, via Zoom on Sunday, February 21 at 11:00 am (ET).

Kalb, Emmy-nominated TV writer and New Yorker contributor, saved every voicemail her grandmother Bobby Bell ever left her. Bobby was a force–irrepressible, glamorous, unapologetically opinionated. Bobby doted on Bess; Bess adored Bobby. Then, at ninety, Bobby died. But in this debut memoir, Bobby is speaking to Bess once more, in a voice as passionate as it ever was in life.

An Emmy-nominated writer for Jimmy Kimmel Live, Bess Kalb also earned her a Writer’s Guild Award in 2016. She has also written for the Oscars and the Emmys. A regular contributor to The New Yorker‘s “Daily Shouts,” her work has been published in The New Republic, Grantland, Salon.com, Wired, The Nation, and elsewhere. She lives in Los Angeles.