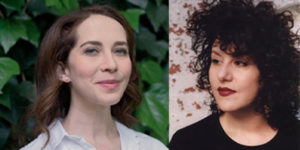 Bess Kalb will talk about NOBODY WILL TELL YOU THIS BUT ME: A True (As Told to Me) Story (Knopf) with Adriana Trigiani via Facebook Live on Tuesday, May 5, at 6:00pm (ET).

Kalb saved every voicemail her grandmother Bobby Bell ever left her. Bobby was a force–irrepressible, glamorous, unapologetically opinionated. Bobby doted on Bess; Bess adored Bobby. Then, at ninety, Bobby died. But in this debut memoir, Bobby is speaking to Bess once more, in a voice as passionate as it ever was in life.

An Emmy-nominated writer for Jimmy Kimmel Live, Kalb also earned a Writer’s Guild Award in 2016. She has also written for the Oscars and the Emmys. A regular contributor to The New Yorker‘s “Daily Shouts,” her work has been published in The New Republic, Grantland, Salon.com, Wired, The Nation, and elsewhere. She lives in Los Angeles.