Bring French Cuisine Into Your Kitchen with Melissa Clark 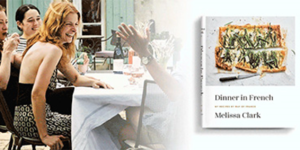 Melissa first fell in love with France and French food as a child. Her parents spent their August vacations traversing the country in search of the best meals with her and her sister in tow. Near to her heart, France is where Melissa’s family learned to cook and eat. And as her own culinary identity blossomed, so too did her understanding of why French food is beloved by Americans.

As part of her book introduction, Clark writes: “That merging of classic French cuisine and the food I grew up eating in Brooklyn is the foundation of how I approach cooking—and the raison d’être of this book. To me, the cuisines are not two distinct things, but seamlessly intertwined into a glorious whole, because I learned about them at the same time. Yes, we waited in line for Di Fara’s pizza, Lundy’s clams, and chicken feet and tripe at our favorite dim sum palace. And we also spent countless weekends fussing over Julia Child’s terrines and Jacques Pépin’s coq au vin, which my mother might slather on leftover challah, and my dad might spike with soy sauce (sorry, Jacques). It wasn’t irreverence so much as an intense culinary curiosity, a playful exploration of the delicious. All of these influences are so essential to the way I think about food that they’re the touchstones of every recipe I create…At our house, the conversation might be in English, but dinner’s in French.”

Today, March 16 at 1 pm EST, Melissa will be doing a Live Signing and answering fan questions. Please tune in and ask her anything!

As part of our campaign, Melissa Clark put together a bonus PDF with her favorite Paris haunts, from coffee and pastries to lunch and dinner to shopping, sightseeing, and more! It’s also filled with behind-the-scenes photos, you’ll have everything you need to visit Paris like a pro (in person or from your couch!). Download your PDF here.

And even if you’re not planning a trip to Paris, you can still bring a little bit of France into your home with this chocolate cake recipe from DINNER IN FRENCH!

With a texture that falls somewhere between a chocolate truffle and a fudgy brownie, French chocolate cakes are about as dark, dense, and decadent as desserts get. This one has a small amount of rye flour mixed into the batter, which gives the cake an appealing earthiness. I like to pair very small slices with a crème anglaise infused with ginger, pepper, cloves, and nutmeg. But if you’d rather not make the crème anglaise, the cake is also excellent served with whipped cream that has been lightly sweetened with a little maple syrup or maple sugar.

Unsweetened cocoa powder, as needed, for the pan

FOR THE CRÈME ANGLAISE

Cake: The cake can be made up to 5 days in advance and stored, well wrapped in plastic wrap, in the refrigerator. You can serve it cold and fudgy, or let it come to room temperature, when it will be a bit softer.

Creme anglaise: After it cools, you can cover the crème anglaise with plastic wrap pressed directly onto its surface, and chill it for up to 1 week. Note that it thickens after chilling, so if you want a thicker custard, plan ahead.