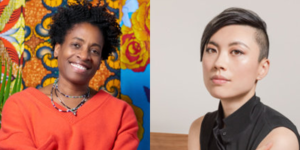 C Pam Zhang , author of HOW MUCH OF THESE HILLS IS GOLD (Riverhead), will be in conversation with Jacqueline Woodson, author of such titles as the National Book Award-winning BROWN GIRL DREAMING (Nancy Paulsen Books), at a virtual event co-hosted by Belletrist & Midtown Scholar Bookstore via Instagram and Twitter on Thursday, April 30 at 4:00pm (ET).

In Zhang’s electric debut novel set against the twilight of the American gold rush, two siblings are on the run in an unforgiving landscape—trying not just to survive but to find a home. Both epic and intimate, blending Chinese symbolism and re-imagined history with fiercely original language and storytelling, HOW MUCH OF THESE HILLS IS GOLD is a haunting adventure story, an unforgettable sibling story, and the announcement of a stunning new voice in literature. On a broad level, it explores race in an expanding country and the question of where immigrants are allowed to belong. But page by page, it’s about the memories that bind and divide families, and the yearning for home.

Born in Beijing but mostly an artifact of the United States, C Pam Zhang has lived in thirteen cities across four countries and is still looking for home. She’s been awarded support from Tin House, Bread Loaf, Aspen Words and elsewhere, and currently lives in San Francisco.

Jacqueline Woodson is the bestselling author of more than two dozen award-winning books. Her New York Times–bestselling memoir, BROWN GIRL DREAMING, received the National Book Award in 2014. Woodson is also the 2018–2019 National Ambassador for Young People’s Literature and the recipient of the 2018 Astrid Lindgren Memorial Award and the 2018 Children’s Literature Legacy Award. In 2015, she was named the Young People’s Poet Laureate by the Poetry Foundation. She lives with her family in New York.