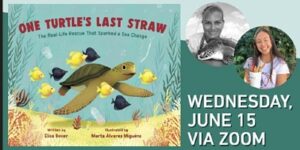 ONE TURTLE’S LAST STRAW is an inspiring true story of how one small turtle and kids all over the country sparked an environmental movement.  In the waters off of Costa Rica, scientists spot an endangered sea turtle and pull him aboard to study him. But he has something stuck in his nose.  A barnacle? A stick? No…it’s a plastic straw!  A reminder that even the smallest straw can hurt our ocean life–and that the smallest demand for change can grow into something big.

Christine Figgener took the viral video of the sea turtle that inspired ONE TURTLE’S LAST STRAW and sparked an anti-straw movement.   Special guest Chloe May Espinosa will also join the conversation. To access a Save the Planet activity sheet for children, click here.

Elisa Boxer is a Maine-based, Emmy-winning journalist and columnist whose writing has appeared in publications including The New York Times, Inc., and Fast Company. Having worked in newspaper, magazine, and television journalism, Elisa is thrilled to bring her reporting and storytelling skills to the world of children’s literature. She is also the author of A Seat at the Table: The Nancy Pelosi Story and The Voice That Won the Vote: How One Woman’s Words Made History.

!! A reminder: You can share this feature. If you are posting to a personal or other non-PRH account you must include the hashtag #TeamPRH !!