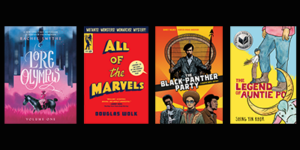 The Will Eisner Comic Industry Awards, commonly shortened to the Eisner Awards, are prizes given for creative achievement in American comic books, sometimes referred to as the comics industry’s equivalent of the Academy Awards. Four Penguin Random House authors and titles took home this much coveted prize at this year’s 34th Annual Will Eisner Comic Industry Awards, held July 22 at the Bayfront San Diego Hilton during Comic-Con!

CONGRATULATIONS to all of our award winning authors and publishers!