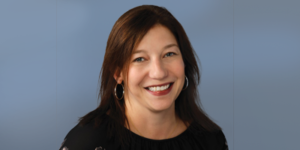 In her speech at the ceremony, Christine reflected on an early mentor who helped set her on her career path: her fifth grade teacher, who helped her write her first poem and changed the trajectory of her life. “While this was only elementary school, my teacher Miss Five had opened a door to me that I may never have discovered without her encouragement.” Christine applauded GWN’s mission of helping over 600 mentees a year, noting, “they’re doing this in a moment where helping young women speak their truth is more important than ever.”

Girls Write Now’s mission is to mentor underserved young women to find their voices through the power of writing and community. Dutton has collaborated with GWN to produce two anthologies of the strong, boundary-pushing essays from mentees in the organization’s Writing & Mentorship program, GENERATION F and CTRL + B. Dutton will produce 2020’s anthology as well.

Please join us in congratulating Christine Ball on joining their ranks!