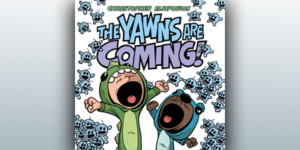 Christopher Eliopoulosvia will be reading THE YAWNS ARE COMING! (Dial Books for Young Readers) in a virtual Read Together, Be Together event via Instagram Live on Tuesday, April 28, at 3:00pm (ET).

Kids will be giggling through their own yawns as they enjoy, THE YAWNS ARE COMING! the new bedtime story by the New York Times bestselling illustrator of the Ordinary People Change the World books.

Two best friends have big plans for their sleepover. They aren’t going to go to bed at all–they’ll stay up playing all night long. But then it happens: The YAWNS show up!

Eliopoulos began his illustration career as a letterer for Marvel and has worked on thousands of comics, including Franklin Richards: Son of a Genius, Pet Avengers, and Cow Boy, all of which he wrote and illustrated. He is the illustrator of the New York Times–bestselling Ordinary People Change the World series of picture book biographies. He lives in New Jersey with his wife and their identical twin sons.