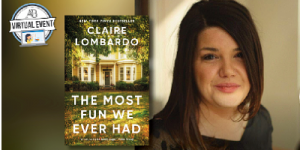 Claire Lombardo, author of THE MOST FUN WE EVER HAD, which was longlisted for the Women’s Prize for Fiction, celebrates the Anchor paperback release of her book at a virtual event hosted by An Unlikely Story Bookstore (Plainville, MA), in conversation with Elin Hilderbrand via Crowdcast on Wednesday, April 7 at 7:00 pm (ET).

During the event, Claire and Elin will discuss THE MOST FUN WE EVER HAD, which NPR called “A wonderfully immersive read that packs more heart and heft than most first novels…A deliciously absorbing novel with—brace yourself—a tender and satisfyingly positive take on family.”

Claire Lombardo earned her MFA in fiction at the Iowa Writers’ Workshop. Prior to writing The Most Fun We Ever Had, she spent several years doing social work in Chicago. She was born and raised in Oak Park, Illinois.