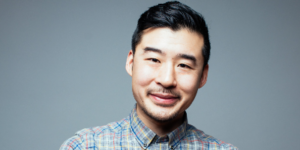 David Chang’s EAT A PEACH, published by Clarkson Potter, is an intimate account of the making of a chef, the story of the modern restaurant world that he helped shape, and how he discovered that success can be much harder to understand than failure.

In this Three Questions for an Editor Igloo interview, Francis Lam, Senior Editor, Clarkson Potter, delves into the special nature of Chang’s life, his career, and storytelling style, how editor and author worked together on this book, and why, as a reader, you will be drawn to EAT A PEACH.

What is most special about David Chang’s life experiences and his storytelling ability?

David Chang is one of the most truly influential chefs in American culinary history.* At Momofuku, he had a hand in changing the entire American culinary landscape but…let’s face it, it’s not like he did this sight unseen. There is probably no American chef who’s had more media coverage. He creates his own media at this point, through the Netflix show Ugly Delicious and his popular podcast, The Dave Chang Show. He’s famously brash and outspoken in public, and has been for over fifteen years. This book was, for a while, going to be titled “Figs on a Plate,” a nod to a famous moment where he caused a whole East Coast – West Coast culinary beef, Biggie and Tupac style, when he mocked California chefs for not doing any proper cooking with their food. Every chef stan in America would have got it immediately.

So I’ll be the first to admit I thought, “What more does Dave Chang have to say that we haven’t already heard?” Actually, I’ll be the second, because he openly asks that in the preface to Eat a Peach.

But within a few pages, I saw the answer: the level of introspection, of true inquisitiveness, of raw self-critique and openness and humor and vulnerability. I was in. And I learned quickly that so much of that public-facing bravado was also a bit of a defense. All his success was undergirded by nearly crippling self-doubt and feelings of inadequacy. He has dealt with his bipolar disorder his whole life, a mental illness so serious he can sometimes barely believe he has survived it—he recognizes it as the engine that has fueled both his deepest regrets and his greatest achievements. And the book is not all about him – it’s an exultation and lamentation of the restaurant industry; it’s an exploration of race; it’s, as he says, a business school text book about how not to run a business.

He’s also so funny. He knows his life path has been absurd, in both the comedy sense and the Camus sense.

I connected to part of his story because our lives resemble one another in some basic ways – our race, our devotion to cooking, both of which he interrogates with eye-opening vigor – but I think his story of self-doubt and near refusal to believe in himself, and of harnessing sheer stubbornness to keep going, will resonate with almost anyone.

* He didn’t invent ramen or even pork buns, but he helped to popularize those items to such a degree that they’ve become staples. Bigger picture: he popularized the notion that highly-trained, lauded chefs in America shouldn’t have to serve their food in stuffy, luxe spaces, nor should they be required to cook food derived from Western Europe.

How would you describe the editor/author process as the manuscript became a finished book?

All editor/author relationships are about trust – a truly profound trust in many cases. One way I find myself dealing with that is to always talk about the text and the characters, not the author. In lots of cases, I make it clear that I don’t see the narrator and the author as the same person; it helps us get some awkwardness out of the way by recognizing that characters are constructs, narrators are constructs, and I don’t hold the author responsible as a human for how the character behaves as a non-human.

But editing something so deeply intimate – Dave is known for baring his soul, but even the most transparent people need space and privacy for processing – required a particular level of intentional detachment. I was so grateful to work not just directly with Dave but also with his terrific cowriter Gabe Ulla, and Chris Ying as well, who is Dave’s partner in their media company. Being a team working on the text really spread the required level of abstraction around, in a sense. We all understood that were working on a book, a project; not on Dave’s life.

What elements of EAT A PEACH do you think will resonate most strongly with readers?

New Andy Weir Novel, PROJECT HAIL MARY, to Be Published in May 2021

Random House is excited to announce the upcoming publication of PROJECT HAIL MARY, a new science-based thriller from Andy Weir, the #1 New York Times bestselling author of The Martian and Artemis.…

Civil rights activist and icon Ruby Bridges has written a new book for young people, THIS IS YOUR TIME, to be published by Delacorte Press, an imprint…

Stolen books, rare manuscripts and two bestselling authors: Fiona Davis will talk about her newest novel, THE LIONS OF FIFTH AVENUE (Dutton), with Adriana Trigiani at…

A Virtual Meet and Greet with Tracy Tutor via Fundo.com (8/5)

Tracy Tutor, author of FEAR IS JUST A FOUR-LETTER WORD: How to Develop the Unstoppable Confidence to Own Any Room (Portfolio), will present a virtual meet…

Sharon Stone Memoir to be Published by Knopf in March 2021

The actress and human rights activist Sharon Stone has written a memoir that will be published by Alfred A. Knopf next March. THE BEAUTY OF LIVING TWICE…