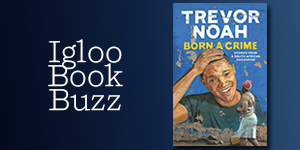 This week’s Igloo Book Buzz selection is Trevor Noah’s BORN A CRIME: Stories from a South African Childhood, published by Spiegel & Grau. Trevor’s unlikely path from apartheid South Africa to the desk of The Daily Show began with a criminal act: his birth. He was born to a white Swiss father and a black Xhosa mother at a time when such a union was punishable by five years in prison. 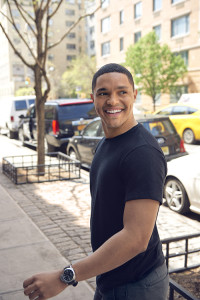 Trevor Noah says, “So much of my story growing up in South Africa during apartheid is about the strength of my mother. She didn’t believe in self-pity. ‘Learn from your past and be better because of your past,’ she used to say, ‘but don’t cry about your past. Life is a full of pain. Let the pain sharpen you, but don’t hold on to it. Don’t be bitter.’”

Chris Jackson, Vice President, Publisher and Editor in Chief, One World, Random House, edited BORN A CRIME, and says, “Trevor comes from an entirely different world than his viewers, certainly than Jon Stewart came from. What the book does is it puts Trevor back into the world he came from. He grew up at this turning point at the end of apartheid-era South Africa and the birth of this very tumultuous new society. As a mixed-race kid, he was the child who should not have existed in that society. And then, in the new world, he had these opportunities that never had existed in the old world. It’s infused with humor throughout, but what’s really amazing about it is it’s so moving.”