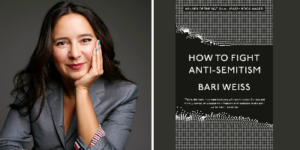 Bari Weiss, highly-regarded journalist and author of HOW TO FIGHT ANTI-SEMITISM (Crown, paperback reprint on sale September 7), which won a 2019 National Jewish Book Award, is the recipient of the 2021 Daniel Pearl Award for Courage and Integrity in Journalism, it was announced by the Los Angeles Press Club. Since 2002, the L.A. Press Club, in conjunction with Judea and Ruth Pearl, the parents of slain Wall Street Journal correspondent Daniel Pearl, have bestowed the Daniel Pearl Award to brave journalists from around the globe. The 2021 award will be presented to Ms. Weiss by Judea Pearl at an Awards Gala Dinner at the Biltmore Hotel in Los Angeles on Saturday, October 16.

“The Daniel Pearl Foundation is thrilled to have Bari Weiss as recipient of the 2021 Daniel Pearl Award for Courage and Integrity in Journalism. Bari has earned this award for her persistent willingness to resist groupthink, her commitment to telling the truth, even when it’s politically inconvenient, and her courage in standing up for her people against the rising tide of anti-Semitism and Zionophobia,” said Judea Pearl in the name of the Daniel Pearl Foundation.

Upon being notified of this award news, Ms. Weiss commented, “My father is Jewish, my mother is Jewish, I am Jewish. Daniel Pearl’s moving last words are true for me, too. I could not be prouder to be a Jew, and it’s impossible to express how honored I am to be receiving this prize.”

Bari Weiss was also the winner of the inaugural Per Ahlmark Award in recognition of her moral courage. In addition, she received the Reason Foundation’s 2018 Bastiat Prize, which honors writing that “best demonstrates the importance of freedom with originality, wit, and eloquence.”

From 2017 to 2020, Ms. Weiss was an opinion writer and editor at The New York Times. Before that, she was an op-ed and book review editor at The Wall Street Journal and a senior editor at Tablet Magazine.