Danica McKellar Breaks Down Multiplication and Division in THE TIMES MACHINE! Via Instagram (5/14) 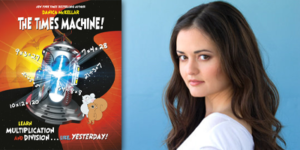 This “Learn From Home” virtual event features Danica McKellar, author of, most recently, THE TIMES MACHINE! (Crown Books for Young Readers), speaking about her new book, multiplication and division, via Instagram on Thursday on May 14, at 1:00pm (ET).

Using colorful stories, silly rhymes, and more, McKellar helps to break down the rules of multiplication and to translate many of the (often confusing!) multiplication and division methods taught in today’s classrooms. This lively “times” travel adventure is a lifesaver for frustrated kids and parents everywhere and a great way to “zero out” worries about homework and tests.

New York Times bestselling author Danica McKellar has helped over one million kids finally “get” math! Best known for her roles on The Wonder Years and The West Wing, Danica is also an internationally recognized mathematician and advocate for math education. A summa cum laude graduate of UCLA with a degree in Mathematics, Danica has been honored in Britain’s esteemed Journal of Physics and The New York Times for her work in mathematics, most notably for her role as co-author of a groundbreaking mathematical physics theorem, which bears her name (The Chayes-McKellar-Winn Theorem.) Her passion for promoting girls’ math education began in 2000, when she was invited to speak before Congress on the importance of women in math and science. Since then, Danica has made it a priority to find time in her busy acting schedule to promote math education, often appearing around the country as a speaker at national mathematics conferences.