Deborah Madison in Conversation with Jane Hirschfield via ExtendedSession.com (11/21) 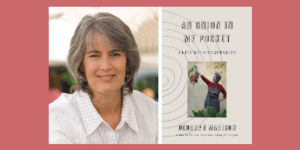 Deborah Madison, author of AN ONION IN MY POCKET: My Life with Vegetables (Knopf), will be in conversation with poet Jane Hirschfield at a virtual event hosted by Book Passage via ExtendedSession.com on Saturday, November 21 at 7:00 pm (ET).

Called “The Queen of Greens” by The Washington Post, Deborah Madison has written a warm, bracingly honest memoir that also gives readers an insider’s look at the vegetarian movement. From her childhood in Big Ag Northern California to working in the kitchen of the then-new Chez Panisse, and from the birth of food TV to the age of green markets everywhere, AN ONION IN MY POCKET is as much the story of the evolution of American foodways as it is the memoir of the woman at the forefront. It is a deeply personal look at the rise of vegetable-forward cooking, and a manifesto for how to eat well.

Deborah Madison is the award-winning author of fourteen cookbooks, including The New Vegetarian Cooking for Everyone and Vegetable Literacy. Her books have received four James Beard Foundation awards and five awards from the IACP; in 2016 she was inducted into the James Beard Foundation Cookbook Hall of Fame. She lives in New Mexico.