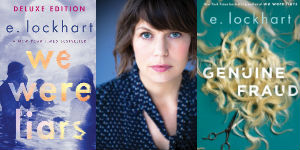 Delacorte Press, an imprint of Random House Children’s Books, has acquired and will publish a new YA novel from the New York Times bestselling author of WE WERE LIARS, E. Lockhart. The deal for world rights was announced by Beverly Horowitz, Senior Vice President, Publisher, Delacorte Press, and longtime Lockhart editor. Random House Children’s Books has already licensed rights in the United Kingdom to Hot Key Books and in Australia and New Zealand to Allen & Unwin; both will publish Lockhart’s GENUINE FRAUD immediately following the U.S. publication. GENUINE FRAUD will carry a first printing of 250,000 copies and release on September 5, 2017.

“It is always cause for celebration when a new E. Lockhart book arrives,” says Ms. Horowitz. “With GENUINE FRAUD Lockhart brilliantly combines a unique structure with the raw emotions of fascinating characters into a subversive psychological suspense novel readers will be hard-pressed to put down—and will want to read again as soon as they finish.”

Edgy and inventive, GENUINE FRAUD is an instantly memorable story of love, betrayal, and entangled relationships that are not what they seem. Lockhart introduces readers to the story of Imogen and Jule—Imogen, a runaway heiress, an orphan, a cook, and a cheat; Jule, a fighter, a social chameleon, and an athlete. This is a novel about intense friendship, a disappearance, murder, bad romance, a girl who refuses to give people what they want from her, and a girl who refuses to be the person she once was. Who is genuine? And who is a fraud? You be the judge. Follow #GenuineFraud for conversation about the book.

In May 2017, Delacorte Press will publish a special deluxe edition of Lockhart’s bestseller WE WERE LIARS, originally published in 2014 and hailed as “haunting” (Wall Street Journal), “mindblowing” (MTV News), and “shocking” (Entertainment Weekly), now with more than half a million copies sold in all formats in North America and legions of fans around the world. The new keepsake edition will include 32 pages of exclusive content that shares never-before-seen letters written to the main character, Cady, by Gat; the original book proposal; the author’s drawings of Beechwood Island and the Sinclair family tree; an excerpt of Genuine Fraud; and more. The book will retail for $18.99 and will be available wherever books are sold on May 23. WE WERE LIARS spent 50 weeks on the New York Times bestseller list (for both hardcover and eBook editions). Follow the latest discussions about the book using #WeWereLiars.