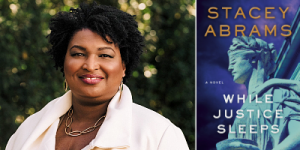 Doubleday and Anchor Books have acquired North American rights for two new political thrillers by Stacey Abrams. Both novels will feature Avery Keene, the heroine of the instant #1 New York Times bestseller WHILE JUSTICE SLEEPS. The books will be published in hardcover and ebook formats; they will later be published in trade paperback by Anchor. Penguin Random House will publish the audiobooks. Abrams was represented in the deal by Linda Loewenthal at The Loewenthal Company

WHILE JUSTICE SLEEPS was published by Doubleday on May 11, 2021 to rave reviews. The Associated Press says the novel is “a deftly written page-turner – understated action, vivid characters, and a tense, plausible plot.” Nora Roberts calls WHILE JUSTICE SLEEPS “a taut, twisty thriller” and Karin Slaughter says, “Stacey Abrams firmly establishes herself as a powerful new player in the crime thriller space with her heroine Avery providing a voice to women everywhere.”

WHILE JUSTICE SLEEPS will debut at #1 on The New York Times bestseller list after its first week on-sale and is now in its third printing with over 131,000 copies in print. Abrams and the novel have been featured on CBS Sunday Morning, Late Night with Seth Meyers, CBS This Morning, GMA3, The View, CNN, MSNBC, and NPR as well as in The New York Times, Entertainment Weekly and first serial in Vanity Fair. Working Title Television, part of NBCUniversal International Studios, has optioned the production rights to WHILE JUSTICE SLEEPS and will develop a television series based on the book, with Abrams as executive producer.

“WHILE JUSTICE SLEEPS showed that Stacey Abrams happens to be a tremendous thriller writer, among her other prodigious talents,” says Vice President, Executive Editor Jason Kaufman. “My favorite feature of the book, beside the satisfyingly complex story she wove, was the introduction of Avery Keene, a young woman whose brilliance and cunning is only surpassed by her resilience. She handles a personal life that is both enriched and strained by real-world factors any reader can recognize. It’s so exciting to have two more Avery Keene thrillers on the horizon, and to see where Stacey’s fertile imagination – and the pressing issues of the day – will take her.”