Dr. Daniel Levitin In Conversation with Bob Weir via Zoom (1/13) 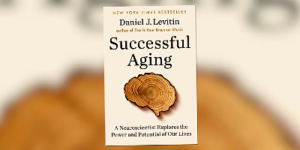 Dr. Levitin looks at the science behind what we all can learn from those who age joyously, as well as how to adapt our culture to take full advantage of older people’s wisdom and experience. Throughout his exploration of what aging really means, using research from developmental neuroscience and the psychology of individual differences, Levitin reveals resilience strategies and practical, cognitive- enhancing tricks everyone should do as they age.

SUCCESSFUL AGING inspires a powerful new approach to how readers think about our final decades, and it will revolutionize the way we plan for old age as individuals, family members, and citizens within a society where the average life expectancy continues to rise.

Daniel J. Levitin, PhD, is a neuroscientist, cognitive psychologist, and bestselling author. He is Founding Dean of Arts & Humanities at the Minerva Schools at KGI in San Francisco, and Professor Emeritus of psychology and neuroscience at McGill University. He is the author of This Is Your Brain on Music, The World in Six Songs, The Organized Mind, A Field Guide to Lies, and Successful Aging. He divides his time between Los Angeles and the San Francisco Bay Area.

One of the founding members of the legendary Grateful Dead, which received a GRAMMY Lifetime Achievement Award in 2007, Bob Weir has become one of rock’s finest and most distinctive rhythm guitarists. In 2016, Weir released Blue Mountain on Columbia/Legacy, his first album of original solo material in more than 10 years. He also received the inaugural Les Paul Spirit Award and a Lifetime Achievement Award from the Americana Music Association. In 2017, Weir was named a UNDP Goodwill Ambassador. Weir is currently a member of Dead & Company with Grateful Dead members Mickey Hart and Bill Kreutzmann along with John Mayer, Oteil Burbridge, and Jeff Chimenti.