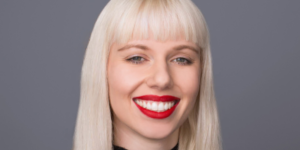 Good Morning America’s August and September 2020 Book Club selections were both acquired by Dutton Editor Stephanie Kelly. THE LIONS OF FIFTH AVENUE by Fiona Davis, the August selection, delves into the history of the New York Public Library as a series of book thefts leave two generations of women to pick up the pieces. FIFTY WORDS FOR RAIN by Asha Lemmie, the September pick and also a B&N Discover and Amazon Spotlight selection, is a sweeping, heartrending coming-of-age novel about a young woman’s quest for acceptance in post-World War II Japan. Both novels received widespread praise and became New York Times bestsellers.

On the heels of her back-to-back book club picks, Stephanie delves into what she looks for in acquiring historical fiction in this Three Questions for an Editor Igloo interview.

What do you look for when determining which historical fiction writers and their books to acquire and edit?

Besides great writing, there are three main things I look for in historical fiction. Firstly, engaging characters. In any genre, even if the book has the best plot in the world, I’m only interested in going on that journey if I’m invested in the characters. This doesn’t mean the characters necessarily need to be likable (though of course I enjoy a protagonist you can root for!), simply that they are compelling enough to want to follow no matter where their journey leads. Secondly, I find myself drawn to characters we don’t get to see as often in history. So much of history tends to be from a white male perspective, so I love getting to look at a piece of history from a female or #ownvoices perspective, to see a different side of a time or story we may think we know, or to learn something new entirely. Finally, what fascinates me most about historical fiction is not only getting to learn about another place and time, but how doing so can shed light on the present.

So many of the issues we face today are issues that have plagued humans for hundreds, if not thousands, of years, and reading about them in a historical context – where they might be resolved as they would today, where they may be resolved very differently, or where they may not be resolved at all (explaining why they are still issues today!) – is always something I find I find so thought-provoking. For example, in THE LIONS OF FIFTH AVENUE by Fiona Davis, the protagonist Laura joins a “radical” feminist group in the year 1913. The group discusses such topics as women’s suffrage and birth control. Obviously, today, women have the right to vote, but reproductive rights, and whether or not a woman has control over her own body, is still a hot-button topic. So even though the book takes place in the past, I couldn’t help but think of the present: How much things have changed, and how much they’ve stayed the same. Which of course led to the thought, How far we’ve come, and far we still have to go. Similarly, in FIFTY WORDS FOR RAIN by Asha Lemmie, the protagonist Nori, who was born in 1940s Japan, faces terrible prejudice and abuse as a child and young woman because she is mixed race. While much has changed from the 1940s to today, racism is obviously still a huge issue around the world. So in those cases, novels about the past not only made me reflect on the present, but on the future – and that’s definitely the sort of historical fiction I’m eager to acquire and share with readers.

How would you describe the editor/author process for two of your recent titles, THE LIONS OF FIFTH AVENUE and FIFTY WORDS FOR RAIN?

Every editor/author process is different: I pride myself on my ability to be flexible with my editing style in order to be as helpful as possible to the different writing and editing style of each of my authors. But on each book, I worked with the authors to ensure that the world building was strong, and that the character’s motivations were clear. This is obviously important in any novel, but I feel like it’s especially important in historical fiction, because a reader may not have a lot of context around the time period in the book. You don’t want a reader pausing to Google “was there X in the year X?” or “was this legal in the year X?” or any number of similar queries that would be a given in a contemporary novel. Unlike science fiction or fantasy, historical fiction is based on a real time and place, but the need to fully paint the world and its inhabitants is just as strong in order to ensure the reader isn’t pulled from the story.

In what ways does the past, as presented in historical fiction, inform and entertain contemporary readers?

I think there are two opposite answers to this question, and the true answer lies in the way they work together. On one hand, we can never literally experience living in another time, so in that way, historical fiction is the best kind of armchair travel. On the other hand, as I touched on above, I think there are so many universal human experiences, or experiences that, if not universal, have been around for years, and it can be entertaining and informative to watch fictional characters in a different time engage in those experiences, while we’re safely behind the page.

Next summer, I’m publishing a novel called DAUGHTERS OF SPARTA, which is a retelling of the Trojan War from the perspective of the infamous Helen and her older sister, Klytemnestra. The book immerses readers into a world they could never experience otherwise– that of two queens in ancient times—yet the struggles they face — to connect with their husbands, to build lives that are fulfilling, and the issues that arise due to their very different takes on motherhood — are struggles that so many women still have today. I think the fact that it is so relatable on a character level is how I can so easily fall into a time in history so drastically different from my own, as I see how they understand and move within their world—and because of that, I’m able to not only learn and be entertained by the differences between past and present, but by the timeless complexities of human nature.

On Monday, May 31st, we pay tribute to the American men and women who have died in service to our country. To honor the occasion, we…