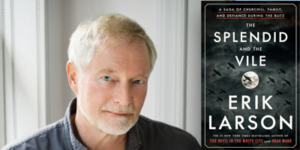 Authors Erik Larson and Christina Baker Kline will talk about Larson’s new book, THE SPLENDID AND THE VILE (Crown), in a virtual event hosted by Watchung Booksellers via Crowdcast ($10 through PayPal to “attend;” register here) on Saturday, May 9, at 3:00pm (ET).