Ethan Hawke In Conversation with Kiley Reid via Zoom (2/20) 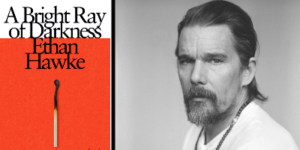 Ethan Hawke will discuss his new book, A BRIGHT RAY OF DARKNESS (Knopf), in conversation with author Kiley Reid, followed by an audience Q&A, at a Books & Books, Harvard Bookstore and Politics & Prose joint event via Zoom on Saturday, February 20 at 7:00 pm (ET).

A BRIGHT RAY OF DARKNESS tells the story of a young man making his Broadway debut in Henry IV just as his marriage is falling apart. According to Hawke’s editor Jordan Pavlin, “It is a novel soaked in rage and sex and longing and despair, a ferociously intelligent evisceration of fame and celebrity, and a transfixing backstage glimpse into the magic of New York theater.”

A four-time Academy Award nominee, twice for writing and twice for acting, Hawke has starred in the films Dead Poets Society, Reality Bites, Gattaca, and Training Day, as well as Richard Linklater’s Before Sunrise trilogy and Boyhood. He made his television debut last fall in the Showtime limited series The Good Lord Bird, based on James McBride’s National Book Award-winning novel. He is the author of five books, including Rules for a Knight, The Hottest State, and Ash Wednesday. He lives in Brooklyn with his four children and his wife.

Kiley Reid earned her MFA from the Iowa Writers’ Workshop, where she was awarded the Truman Capote Fellowship and taught undergraduate creative writing workshops with a focus on race and class. SUCH A FUN AGE is her debut novel. Her short stories have been featured in Ploughshares, December, New South, and Lumina. Reid lives in Philadelphia.