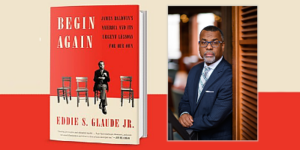 Our new Igloo Book Buzz selection is Eddie Glaude Jr.’s BEGIN AGAIN: James Baldwin’s America and Its Urgent Lessons for Our Own, published by Crown. Mixing biography with history, memoir, and trenchant analysis of our current moment, this book is Glaude’s endeavor, following Baldwin, to bear witness to the difficult truth of race in America today. It is at once a searing exploration that lays bare the tangled web of race, trauma, and memory, and a powerful interrogation of what we all must ask of ourselves in order to call forth a new America.

Crown Executive Editor Kevin Doughten shares insights into collaborating with Glaude and what was involved in the creation of BEGIN AGAIN: “Working with Eddie is equal parts exhilarating, inspiring, and illuminating. We’ve been working together for eight years and I have been a fortunate beneficiary of his generosity and trust in so many ways. Eddie makes the hard work of shaping ideas fun, for which I’m grateful, and I am driven forward by his unwavering belief, which I share, that these ideas and stories can have a real impact in the hands of readers.

“When we started working on this book there was already a profound sense that a window of opportunity for change was closing. President Obama had left office and the energy that had fueled the tremendous advances made by the Black Lives Matter movement proved, understandably, difficult to sustain. Eddie had a vision that in Baldwin, one could find a model not just for how to think about what genuine change would mean but also for how to process the feeling of being repeatedly let down and betrayed—the exhaustion that came along with trying, as Eddie often says, to push the same damn rock up the hill over and over again. In the third chapter of Begin Again, Eddie discusses how, by 1968, both Baldwin and Dr. Martin Luther King, Jr. were talking about the civil rights movement as a kind of failed project, because the legal remedies of the Civil Rights Act and the Voting Rights Act, while historic, did not break the stranglehold of the value gap—the fact that in America, white lives are valued more than others. In our moment, we have a chance once again to change this, but we are only at the beginning and the costs have already been impossibly high. Baldwin’s story offers, I think, a way of coping with the immensity of the challenge and finding the strength to keep pushing forward when the change we seek for this country feels beyond our grasp.”

Eddie Glaude Jr. reveals his inspiration behind the writing of this book and what he hopes will be reader takeaways: “I wanted to make sense of my own despair and rage in a moment where the country, once again, doubled down on its racist commitments. Donald Trump represented, for me, a vehement assertion that ours was, and must remain, a white nation in the vein of old Europe. I had to find resources to keep the faith in order to keep fighting—to not resign myself to the current reality of this country.

“Baldwin has always been a resource for me. So I retreated from the chaos of Trumpism into the storms of his life, and there amid the rubble and ruins I found what I was looking for: despair, rage, and faith. Begin Again is the result. I think with Baldwin (focusing mostly on his later writings) to offer a way forward in this moment of moral reckoning in the country.

“As for takeaways, what I do know is what is required of us goes beyond our current musings about antiracism. Baldwin wrote in 1962 that ‘the trouble is deeper than we wished to think: the trouble is in us. And we will never remake those cities, or conquer our cruel and unbearable human isolation—we will never establish human communities—until we stare our ghastly failure in the face.’ After reading Begin Again, I pray the reader understands the depth of our trouble and the magnitude of the choice before us all. We have to choose life—a different way of being together—this time, because what awaits us if we fail may very well be unbearable.”

Ibram X. Kendi’s HOW T0 BE AN ANTIRACIST To Be Published In Spanish By Vintage Español

Vintage Español will publish the Spanish-language edition of Ibram X. Kendi’s number-one New York Times bestseller How to Be an Antiracist. The publication, scheduled for October…

There’s a Book for That: Doctors

The READ TOGETHER, BE TOGETHER E-Hotline Is Now Open

As part of the READ TOGETHER, BE TOGETHER mission to celebrate the importance, and power, of the shared reading experience between an adult and a child…

Crown Executive Editor Kevin Doughten shares insights into collaborating with Glaude and what was involved in the creation of BEGIN AGAIN: “Working with Eddie is equal…

Alfred A. Knopf Books for Young Readers will publish a previously unseen manuscript by Philip Pullman on October 15, 2020, it was announced today by Barbara…

Books & Books presents an exclusive virtual appearance by award-winning actor Jim Carrey and co-writer Dana Vachon for the launch of their book, MEMOIRS AND MISINFORMATION…