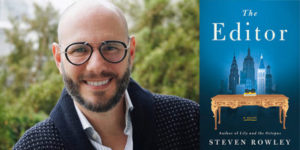 The film rights for THE EDITOR, an upcoming Putnam title from Steven Rowley, have been acquired by Fox 2000. Greg Berlanti, director of Love Simon, has been set to direct and produce the film, as reported by Variety. Rowley will write the screenplay and executive produce, with Berlanti producing alongside Rob Weisbach and Sarah Schechter. Erin Siminoff and Molly Saffron will oversee for Fox 2000.

THE EDITOR was acquired by Putnam’s Editor-in-Chief Sally Kim and will be published in Spring 2019. The novel follows a young novelist, James Smale, who finally gets his big break when his novel sells to an editor at a major publishing house: none other than Jacqueline Kennedy Onassis. Jackie and James develop an unexpected friendship, and she pushes him to write an authentic ending, encouraging him to head home to confront the truth about his relationship with his mother. But when a long-held family secret is revealed, he realizes his editor may have had a larger plan that goes beyond the page.

Steven Rowley is also the bestselling author of Lily and the Octopus, which has been translated into nineteen languages and is currently in development as an Amazon Studios feature film. He has worked as a freelance writer, newspaper columnist, and screenwriter. Originally from Portland, Maine, Rowley is a graduate of Emerson College. He currently resides in Los Angeles.