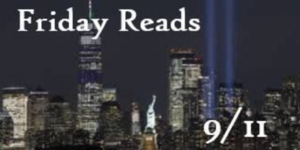 Today marks the anniversary of the 9/11 attacks. September 11th, 2001 saw the deadliest terrorist attacks ever on American soil. From survivors’ stories to a Pulitzer-Prize winning historical account, the following books memorialize that tragic day and analyze its long-term effects.

The official book created by the National September 11 Memorial & Museum, this keepsake volume honors those lost—and celebrates the spirit of hope as it tells the story of rescue, recovery, and the building of the memorial plaza (opened on September 11, 2011), and the museum (opened on May 21, 2014).

After 9/11 poetry was everywhere—on telephone poles, on warehouse walls, in the bus shelters. People spontaneously turned to poetry to understand and cope with the tragedy of the attack. Full of humor, love, rage and fear, this diverse collection of poems attests to the power of poetry to express and to heal the human spirit. This anthology features poems by Pulitzer Prize winner Stephen Dunn; Best American Poetry series editor David Lehman; National Book Award winner and New York State Poet Jean Valentine; the first ever Nuyorican Slam-Poetry champ; poets laureate of Brooklyn and Queens; and a poem and introduction by National Book Award finalist Alicia Ostriker.

LAST MAN DOWN: A FIREFIGHTER’S STORY OF SURVIVAL AND ESCAPE FROM THE WORLD TRADE CENTER by Richard Picciotto, Daniel Paisner

On September 11, 2001, FDNY Battalion Chief Richard “Pitch” Picciotto answered the call heard around the world. In minutes, he was at Ground Zero of the worst terrorist attack on American soil, as the Twin Towers of the World Trade Center began to burn—and then to buckle. Last Man Down is a first responder’s harrowing account of 9/11—the inspirational true story of an American hero who gave nearly everything for others during one of New York City’s darkest hours.

THE ELEVENTH DAY: THE FULL STORY OF 9/11 by Anthony Summers, Robbyn Swan

A finalist for the Pulitzer Prize in History, The Eleventh Day is a “broad-shouldered look at the deceit, destruction, and disaster that followed.”—The Boston Globe

Investigative journalists Anthony Summers and Robbyn Swan sift through the staggering amount of information available on America’s darkest hours and offer a new account: what happened, why it wasn’t stopped, how intelligence agencies failed, how the event was recorded and reported, how the U.S. government and military responded, who was behind it, and what questions remain unanswered.

THE LOOMING TOWER: AL QAEDA AND THE ROAD TO 9/11 by Lawrence Wright

The bestselling, Pulitzer Prize-winning account of the history of 9/11: the basis for the original Hulu series starring Alec Baldwin, Peter Sarsgaard, Jeff Daniels, and Tahar Rahim. A gripping narrative that spans five decades, The Looming Tower explains in unprecedented detail the growth of Islamic fundamentalism, the rise of al-Qaeda, and the intelligence failures that culminated in the attacks on the World Trade Center.

WE ARE ALL SUSPECTS NOW: UNTOLD STORIES FROM IMMIGRANT COMMUNITIES AFTER 9/11 by Tram Nguyen; Foreword by Edwidge Danticat

In an ironic reversal of the American dream, a staggering 20,000 members of the immigrant community of Midwood, Brooklyn (known as Little Pakistan), voluntarily left the United States after 9/11. Tram Nguyen reveals the human cost of the domestic war on terror and examines the impact of post-9/11 policies on people targeted because of immigration status, nationality, and religion.

THE GROUND TRUTH: THE UNTOLD STORY OF AMERICA UNDER ATTACK ON 9/11 by John Farmer

As one of the primary authors of the 9/11 Commission Report, John Farmer is proud of his and his colleagues’ work. Yet he came away from the experience convinced that there was a further story of the September 11th attacks to be told, one he was uniquely qualified to write.

For Americans, the terrorist attacks of September 11, 2001, crystallized the notion of homeland security. But what does it mean to “secure the homeland” in the twenty-first century? What lessons can be drawn from the first two decades of U.S. government efforts to do so? In Beyond 9/11, leading academic experts and former senior government officials address the most salient challenges of homeland security today.

THE RED BANDANNA: A LIFE. A CHOICE. A LEGACY by Tom Rinaldi

Welles Crowther did not see himself as hero. He was just an ordinary kid who played sports, volunteered at his local fire department, and eventually headed off to college and then Wall Street to start a career. Throughout it all, he always kept a red bandanna in his pocket, a gift from his father. On September 11, 2001, Welles was working on the 104th floor of the South Tower of the World Trade Center when the Twin Towers were attacked. That day, Welles made a fearless choice and in doing so, saved many lives. The survivors didn’t know his name, but one of them remembered a single detail clearly: the man was wearing a red bandanna. Welles Crowther was a hero.

Winner of the Christopher Award

Award-winning ESPN reporter Tom Rinaldi brings Welles’s inspirational story of selflessness and compassion to life in this accessible young readers’ adaptation of his New York Times bestselling book. This powerful story of making a difference through our actions is perfect for helping the post-9/11 generation understand the meaning of this historic day through the eyes of one young man.

FIREBOAT: THE HEROIC ADVENTURES OF THE JOHN J. HARVEY by Maira Kalman

This is the inspiring true story of the John J. Harvey—a retired New York City fireboat reinstated on September 11, 2001. Originally launched in 1931, the Harvey was the most powerful fireboat of her time. After the September 11 attacks, with fire hydrants at Ground Zero inoperable and the Hudson River’s water supply critical to fighting the blaze, the fire department called on the Harvey for help. There were adjustments—forcing water into hoses by jamming soda bottles and wood into nozzles with a sledgehammer—and then the fireboat’s volunteer crew pumped much-needed water to the disaster site. The John J. Harvey proved she was still one of New York’s Bravest!

For more on these and related titles visit 9/11