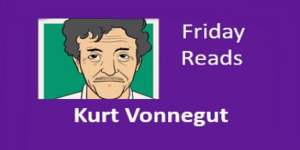 Kurt Vonnegut’s life and work is of perpetual interest, even more so with the December release of LOVE, KURT compiled by his daughter. Perhaps there are some of his writings you’ve yet to discover? Time for a tour of this literary idol’s seminal works and some exciting extras!

A never-before-seen collection of deeply intimate love letters from Kurt Vonnegut to his first wife, Jane, compiled and edited by their daughter and reproduced in gorgeous full color.

PITY THE READER: ON WRITING WITH STYLE by Kurt Vonnegut, Suzanne McConnell

Pity the Reader includes rare photos and reproductions, Vonnegut’s own account in his own words of how he became a writer and why it matters, and previously untold stories by and about Vonnegut as teacher and friend.

Here for the first time is the complete short fiction of one of the twentieth century’s foremost imaginative geniuses. More than half of Vonnegut’s output was short fiction, and never before has the world had occasion to wrestle with it all together. During his lifetime Vonnegut published fewer than half of the stories he wrote, his agent telling him in 1958 upon the rejection of a particularly strong story, “Save it for the collection of your works which will be published someday when you become famous. Which may take a little time.” Selected and introduced by longtime Vonnegut friends and scholars Dan Wakefield and Jerome Klinkowitz, Complete Stories puts Vonnegut’s great wit, humor, humanity, and artistry on full display.

Cat’s Cradle is Kurt Vonnegut’s satirical commentary on modern man and his madness. An apocalyptic tale of this planet’s ultimate fate and a book that left an indelible mark on an entire generation of readers.

SLAUGHTERHOUSE-FIVE: A NOVEL by Kurt Vonnegut

Slaughterhouse-Five, an American classic, is one of the world’s great antiwar books. Centering on the infamous World War II firebombing of Dresden, the novel is the result of what Kurt Vonnegut described as a twenty-three-year struggle to write a book about what he had witnessed as an American prisoner of war. It combines historical fiction, science fiction, autobiography, and satire in an account of the life of Billy Pilgrim, a barber’s son turned draftee turned optometrist turned alien abductee. As Vonnegut had, Billy experiences the destruction of Dresden as a POW. Unlike Vonnegut, he experiences time travel, or coming “unstuck in time.”

Decades after its initial publication at the height of the Vietnam War, Vonnegut’s portrayal of political disillusionment, PTSD, and postwar anxiety feels as relevant, darkly humorous, and profoundly affecting as ever, an enduring beacon through our own era’s uncertainties.

BREAKFAST OF CHAMPIONS: A NOVEL by Kurt Vonnegut

In Breakfast of Champions, one of Kurt Vonnegut’s most beloved characters, the aging writer Kilgore Trout, finds to his horror that a Midwest car dealer is taking his fiction as truth. What follows is murderously funny satire, as Vonnegut looks at war, sex, racism, success, politics, and pollution in America and reminds us how to see the truth.

This extraordinary collection of personal correspondence has all the hallmarks of Kurt Vonnegut’s fiction. Written over a sixty-year period, these letters, the vast majority of them never before published, are funny, moving, and full of the same uncanny wisdom that has endeared his work to readers worldwide.

KURT VONNEGUT: THE LAST INTERVIEW: AND OTHER CONVERSATIONS by Kurt Vonnegut

One of the great American iconoclasts holds forth on politics, war, books and writers, and his personal life in a series of conversations, including his last published interview. During his long career Kurt Vonnegut won international praise for his novels, plays, and essays. In this new anthology of conversations with Vonnegut—which collects interviews from throughout his career—we learn much about what drove Vonnegut to write and how he viewed his work at the end.

THE EDEN EXPRESS: A MEMOIR OF INSANITY by Mark Vonnegut, Kurt Vonnegut

The Eden Express describes, from the inside Mark Vonnegut’s experience in the late ’60s and early ’70s—a recent college grad; in love; living communally on a farm, with a famous and doting father, cherished dog, and prized jalopy—and then the nervous breakdowns in all their slow-motion intimacy, the taste of mortality and opportunity for humor they provided, and the grim despair they afforded as well.

FATES WORSE THAN DEATH: AN AUTOBIOGRAPHICAL COLLAGE by Kurt Vonnegut

“An anthology in which Vonnegut freely quotes himself on everything from art and architecture to madness and mass murder…Uncompromising.”—Los Angeles Times

ARMAGEDDON IN RETROSPECT by Kurt Vonnegut

A fitting tribute to a literary legend and a profoundly humane humorist, Armageddon in Retrospect is a collection of twelve previously unpublished writings. Imbued with Vonnegut’s trademark rueful humor and outraged moral sense, the pieces range from a letter written by Vonnegut to his family in 1945, informing them that he’d been taken prisoner by the Germans, to his last speech, delivered after his death by his son Mark, who provides a warmly personal introduction to the collection.

For more on these and related titles visit Kurt Vonnegut