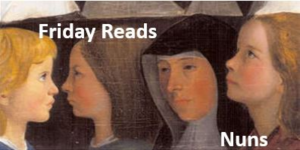 Inspired by the popularity of Lauren Groff’s new novel MATRIX, about Marie de France, the lives of nuns have piqued our interest. Whether contemporary or historical, fiction or nonfiction, the following recommended reading may surprise you:

MATRIX: A NOVEL by Lauren Groff

Cast out of the royal court by Eleanor of Aquitaine, deemed too coarse and rough-hewn for marriage or courtly life, seventeen-year-old Marie de France is sent to England to be the new prioress of an impoverished abbey, its nuns on the brink of starvation and beset by disease. Marie, born the last in a long line of women warriors and crusaders, is determined to chart a bold new course for the women she now leads and protects. But in a world that is shifting and corroding in frightening ways, one that can never reconcile itself with her existence, will the sheer force of Marie’s vision be bulwark enough?

THE LAIS OF MARIE DE FRANCE WITH TWO FURTHER LAIS IN THE ORIGINAL OLD FRENCH by Marie France, Introduction and translation by Keith Busby, Glyn Burgess

RIVER OF FIRE: ON BECOMING AN ACTIVIST by Helen Prejean

A revelatory, intimate memoir from the author of Dead Man Walking, in which our nation’s foremost leader in efforts to abolish the death penalty shares the story of her growth as a spiritual leader, speaks out about the challenges of the Catholic Church, and shows that joy and religion are not mutually exclusive.

SAINTS FOR ALL OCCASIONS: A NOVEL by J. Courtney Sullivan

Nora and Theresa Flynn are twenty-one and seventeen when they leave their small village in Ireland and journey to America. Fifty years later, Nora is the matriarch of a big Catholic family with four grown children. Estranged from her sister, Theresa is a cloistered nun, living in an abbey in rural Vermont. Until, after decades of silence, a sudden death forces Nora and Theresa to confront the choices they made so long ago.

THE NUNS OF SANT’AMBROGIO: THE TRUE STORY OF A CONVENT IN SCANDAL by Hubert Wolf, Ruth Martin

In 1858, a German princess, recently inducted into the convent of Sant’Ambrogio in Rome, wrote a frantic letter to her cousin, a confidant of the Pope, claiming that she feared for her life. A subsequent investigation by the Church’s Inquisition uncovered the shocking secrets of a convent ruled by a beautiful young mistress, who coerced her novices into lesbian initiation rites and heresies, and who entered into an illicit relationship with a young theologian. Drawing upon written testimony and original documents discovered in a secret Vatican archive, The Nuns of Sant’Ambrogio is the never-before-told true story of how one woman was able to practice deception, heresy, seduction, and murder in the heart of the Catholic Church.

The year is 1570, and a new novice has just been forced into the Italian convent of Santa Caterina. Ripped by her family from the man she loves, sixteen-year-old Serafina is sharp and defiant. Her first night inside the walls is spent in an incandescent rage so violent that the dispensary mistress, Suora Zuana, is dispatched to the girl’s cell to sedate her. Thus begins a complex relationship of trust and betrayal. As Serafina rails against her incarceration, disorder and rebellion mount inside the convent, while beyond its walls, the dictates of the Counter-Reformation begin to impose a regime of oppression that threatens what little freedom the nuns have enjoyed.

THE TULIP AND THE POPE: A NUN’S STORY by Deborah Larsen

The story of novelist and poet Deborah Larsen’s young womanhood, The Tulip and the Pope is both an exquisitely crafted spiritual memoir and a beautifully nuanced view of life in the convent. In midsummer of 1960, nineteen-year-old Deborah shares a cab to a convent. She and the teenage girls with her, passionate to become nuns, heedless of all they are leaving behind, smoke their last cigarettes before entering their new lives. Larsen’s memoir lets us into the hushed life of the convent. Eventually the physical world—the lush tulip she remembers seeing as a girl, the snow she tunneled in, and even the mystery of sex—begins to seem to her an alternative theater for a deep understanding and love of God.

In 1758 Diderot’s friend the Marquis de Croismare became interested in the cause célèbre of a nun who was appealing to be allowed to leave a Paris convent. Less than a year later, in an affectionate attempt to trick his friend, Diderot created this masterpiece – a fictitious set of desperate and pleading letters to the Marquis from a teenage girl forced into the nunnery because she is illegitimate. Part gripping novel, part licentious portrayal of sexual fervor and part damning attack on oppressive religious institutions, it remains one of the most utterly original works of the eighteenth-century.

For more information on these and related titles visit Nun Lit

On September 14, the judges for the 2021 Booker Prize took a major step to determine this year’s winner. Their short list of six titles has…

Emmy Award–winning talk show host, comedian, actress, and entertainment pioneer Ellen DeGeneres will publish a picture book based on the animated TV series of the same…

International Literacy Day (ILD) 2021 will be celebrated under the theme “Literacy for a human-centred recovery: Narrowing the digital divide.” Back in 1967, UNESCO officially proclaimed…

Nancy Pearl, a highly regarded former librarian and author of the Book Lust series, is the recipient of the National Book Foundation’s 2021 Literarian Award for…

There’s a Book for That: International Literacy Day