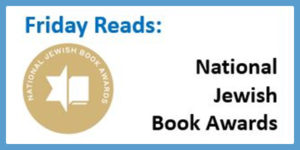 This week, the Jew­ish Book Coun­cil announced the win­ners of the 2019 Nation­al Jew­ish Book Awards, now in its six­ty-ninth year. Congratulations to all the winners – 7 books published by Penguin Random House imprints among them! Founded in 1944, The Jewish Book Council is the longest-running organization devoted exclusively to the support and celebration of Jewish literature. The win­ners will be hon­ored on March 17 at an awards din­ner and cer­e­mo­ny at the Bohemi­an Nation­al Hall in Man­hat­tan. Below are Penguin Random House’s award winners in adult and young reader categories:

From the acclaimed, best-selling memoirist, novelist and host of the hit podcast Family Secrets, comes a memoir about the staggering family secret uncovered by a genealogy test: an exploration of the urgent ethical questions surrounding fertility treatments and DNA testing, and a profound inquiry of paternity, identity, and love.

HOW TO FIGHT ANTI-SEMI­TISM by Bari Weiss (Crown)

The prescient New York Times writer delivers an urgent wake-up call to all Americans exposing the alarming rise of anti-Semitism in this country—and explains what we can do to defeat it.

In fresh and modern language, Blake revisits the story of the Ark that rescued life on earth, and rediscovers the agonizing burdens endured by the woman at the heart of the story. Naamah is a parable for our time: a provocative fable of body, spirit, and resilience.

The award-winning author of The Eichmann Trial and Denial: Holocaust History on Trial gives us a penetrating and provocative analysis of the hate that will not die, focusing on its current, virulent incarnations on both the political right and left: from white supremacist demonstrators in Charlottesville, Virginia, to mainstream enablers of antisemitism such as Donald Trump and Jeremy Corbyn, to a gay pride march in Chicago that expelled a group of women for carrying a Star of David banner.

The thread that weaves these pieces together is our inability to communicate, to see so little of the world around us and to understand each other even less. Yet somehow, in these pages, through Etgar’s deep love for humanity and our hapless existence, a bright light shines through and our universal connection to each other sparks alive.

THE UNWANT­ED: AMER­I­CA, AUSCHWITZ, AND A VIL­LAGE CAUGHT IN BETWEEN by Michael Dobbs (Alfred A.Knopf, in asso­ci­a­tion with the Unit­ed States Holo­caust Memo­r­i­al Museum)

Drawing on previously unpublished letters, diaries, interviews, and visa records, Michael Dobbs provides an illuminating account of America’s response to the refugee crisis of the 1930s and 1940s. He describes the deportation of German Jews to France in October 1940, along with their continuing quest for American visas. And he re-creates the heated debates among U.S. officials over whether or not to admit refugees amid growing concerns about “fifth columnists,” at a time when the American public was deeply isolationist, xenophobic, and antisemitic.

From the author of Blind, a heart-wrenching coming-of-age story set during World War II in Shanghai, one of the only places Jews without visas could find refuge.

Visit the Edelweiss collection for more about the Jewish Book Awards

Visit the Jewish Book Council site for a complete list of winners and to learn more.