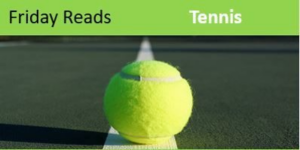 ALL IN: AN AUTOBIOGRAPHY by Billie Jean King, Johnette Howard, Maryanne Vollers

NEW YORK TIMES BEST SELLER • An inspiring and intimate self-portrait of the champion of equality that encompasses her brilliant tennis career, unwavering activism, and an ongoing commitment to fairness and social justice.

THE DIVINE MISS MARBLE: A LIFE OF TENNIS, FAME, AND MYSTERY by Robert Weintraub

Now in paperback, the story of 1930s tennis icon Alice Marble and her life of sports, celebrity, and incredible mystery. In The Divine Miss Marble, bestselling author Robert Weintraub traveled the country to uncover her fascinating story. And the more he learned about her, the more her mysteries and contradictions deepened. Alice was a powerful woman who knew her worth, demanding equal pay to men decades earlier than other female athletes; yet she was held in sway by a domineering, highly successful coach with whom she had a volatile relationship. She was renowned for her California style, and had a brilliant mind and the guts to overcome a lifetime of physical trauma.

An instant classic of American sports writing—the tennis essays of David Foster Wallace, “the best mind of his generation” (A. O. Scott) and “the best tennis-writer of all time” (New York Times)

Gathered for the first time in a deluxe collector’s edition from Library of America, here are David Foster Wallace’s legendary writings on tennis, five tour-de-force pieces written with a competitor’s insight and a fan’s obsessive enthusiasm. Wallace brings his dazzling literary magic to the game he loved as he celebrates the other-worldly genius of Roger Federer; offers a wickedly witty dissection of Tracy Austin’s memoir; considers the artistry of Michael Joyce, a supremely disciplined athlete on the threshold of fame; resists the crush of commerce at the U.S. Open; and recalls his own career as a “near-great” junior player. Whiting Award-winning writer John Jeremiah Sullivan provides an introduction.

All the passion, drama, and beauty of tennis is captured in this most up-to-date comprehensive history—from its early beginnings as a sport, the greatest matches ever played, to its global star players and personalities of present day. This volume is a must-read for tennis aficionados.

SISTERS AND CHAMPIONS: THE TRUE STORY OF VENUS AND SERENA WILLIAMS by Howard Bryant, Floyd Cooper

Everyone knows the names Venus & Serena Williams. They’ve become synonymous with championships, hard work, and with shaking up the tennis world. This inspirational true story, written by award-winning sports journalist, Howard Bryant, and brought to beautiful life by Coretta Scott Kind Award and Honor winner, Floyd Cooper, details the sisters’ journey from a barely-there tennis court in Compton, CA, to Olympic gold medals and becoming the #1 ranked women in the sport of tennis. Here is a worthy ode to Venus and Serena Williams, the incredible sister duo who will go down in history as two of the greatest athletes of all time.

Although stars like Serena Williams cite Althea Gibson as an inspiration, Gibson’s story is not well-known to many young people today. Growing up tough and rebellious in Harlem, Althea took that fighting attitude and used it to go after her goals of being a tennis champion, and a time when tennis was a game played mostly by wealthy white people in country clubs that excluded African Americans. In 1956, she became the first Black American to win a major championship when she won at The French Open. When she won the celebrated Wimbledon tournament the following year, Gibson shook hands with the Queen of England. Not bad for a kid from the streets of Harlem.

This new and updated edition of this inspirational biography contains recent information on the impact of Gibson’s legacy.

For more on these titles visit the collection Tennis Reading