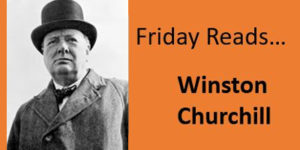 Sir Winston Leonard Spencer-Churchill, whose courage and conviction as Prime Minister led Britain to an allied victory in the Second World War, is once-again part of our cultural conversation due to Erik Larson’s new book, THE SPLENDID AND THE VILE: A Saga of Churchill, Family, and Defiance During the Blitz. To learn more about the full life of Winston Churchill, we’ve gathered many hours’ worth of fine reading about the visionary leader.

THE SPLENDID AND THE VILE: A SAGA OF CHURCHILL, FAMILY, AND DEFIANCE DURING THE BLITZ by Erik Larson

The author of The Devil in the White City and Dead Wake delivers a fresh and compelling portrait of Winston Churchill and London during the Blitz The Splendid and the Vile takes readers out of today’s political dysfunction and back to a time of true leadership, when, in the face of unrelenting horror, Churchill’s eloquence, courage, and perseverance bound a country, and a family, together.

In this landmark, New York Times bestselling biography of Winston Churchill based on extensive new material, the true genius of the man, statesman and leader can finally be fully seen and understood—by the award-winning author of Napoleon. We think of Churchill as a hero who saved civilization from the evils of Nazism and warned of the grave crimes of Soviet communism, but Roberts’s masterwork reveals that he has as much to teach us about the challenges leaders face today—and the fundamental values of courage, tenacity, leadership and moral conviction.

CHURCHILL & ORWELL: THE FIGHT FOR FREEDOM by Thomas E. Ricks

The glorious climax of Churchill and Orwell is the work they both did in the decade of the 1940’s to triumph over freedom’s enemies. And though Churchill played the larger role in the defeat of Hitler and the Axis, Orwell’s reckoning with the menace of authoritarian rule in Animal Farm and 1984 would define the stakes of the Cold War for its fifty-year course, and continues to give inspiration to fighters for truth and freedom to this day. Taken together, in Thomas E. Ricks’s masterful hands, their lives are a beautiful testament to the power of moral conviction, and to the courage it can take to stay true to it. Also available as an audiobook.

HERO OF THE EMPIRE: THE BOER WAR, A DARING ESCAPE, AND THE MAKING OF WINSTON CHURCHILL by Candice Millard

From New York Times bestselling author of Destiny of the Republic and The River of Doubt, a thrilling narrative of Winston Churchill’s extraordinary and little-known exploits during the Boer War. Also available as an audiobook.

CLEMENTINE: THE LIFE OF MRS. WINSTON CHURCHILL by Sonia Purnell

Late in life, Winston Churchill claimed that victory in the Second World War would have been “impossible” without the woman who stood by his side for 57 turbulent years. Why then do we know so little about her? Sonia Purnell’s Clementine, the first real biography of this remarkable woman,

The Last Lion: Defender of the Realm begins shortly after Winston Churchill became prime minister—when Great Britain stood alone against the overwhelming might of Nazi Germany. In brilliant prose and informed by decades of research, William Manchester and Paul Reid recount how Churchill organized his nation’s military response and defense, convinced FDR to support the cause, and personified the “never surrender” ethos that helped win the war.

In this volume, David Cannadine selects thirty-three orations ranging over fifty years, demonstrating how Churchill gradually hones his rhetoric until the day when, with spectacular effect, ‘he mobilized the English language, and sent it into battle’ (Edward R. Murrow).

While he is often likened to the English bulldog due to his tenacious personality and even his physical resemblance to the breed, Mr. Churchill was actually a devoted poodle owner and held quite an affinity for his miniature poodle, Rufus, who withstood the trials of World War II by his owner’s side. Readers follow Rufus and Winston’s friendship through major events in the war.

WHO WAS WINSTON CHURCHILL? by Ellen Labrecque, Who HQ, Jerry Hoare

Widely regarded as one of the greatest wartime leaders of the 20th century, Churchill was also a historian, a writer, and an artist. He is the only British Prime Minister to have won the Nobel Prize in Literature, and was the first person to be made an honorary citizen of the United States.

For even more on Winston Churchill visit the broad collection: Churchill