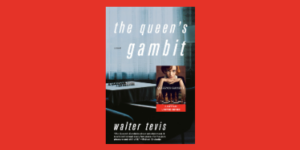 The Netflix adaption of the Water Tevis novel, THE QUEEN’S GAMBIT, published by Vintage, has become the must-watch limited series of the fall. Starring Anya Taylor-Joy as chess prodigy Beth Harmon, with a talented supporting cast, including Bill Camp, Moses Ingram, Marielle Heller and Thomas Brodie-Sangster, the story follows Harmon’s rise from an orphanage (where she learns chess from a janitor) to the world stage, marked by a 1960s feminist spirit, an unwavering determination to win, and periods of isolation, drug and alcohol dependency.

The book has received high praise, including from two prominent authors – Michael Ondaatje: “The Queen’s Gambit is sheer entertainment. It is a book I reread every few years–for the pure pleasure and skill of it.” and Jonathan Lethem: “Beth Harmon is an unforgettable creation–and The Queen’s Gambit is Walter Tevis’s most consummate and heartbreaking work.”

The Netflix series, directed and written by Scott Frank, has been widely acclaimed by many media outlets, including The New York Times, TIME , The Hollywood Reporter and NPR. Reviewers often singled out Beth Harmon, a gifted, compelling and strong female character. On NPR’s Fresh Air, John Powers shared this perspective: “Our ideas about genius are gendered or, more bluntly, sexist. Even as our pop culture is overstuffed with stories about men celebrated as geniuses, be it Van Gogh, Ray Charles or Stephen Hawking, plus fictional dudes like Sherlock Holmes, there are almost none about women. You have Virginia Woolf in The Hours, Katherine Johnson in Hidden Figures, maybe The Girl With The Dragon Tattoo. We can add Beth Harmon to this short list.”

The series has also attracted such notable fans as Stephen King (“I’ve watched a lot of TV during this cursed year–I know I’m not alone–and the best of the best is THE QUEEN’S GAMBIT, on Netflix. Utterly thrilling.”) and Patti Smith (“The last seven nights I was completely captivated by The Queens Gambit, a beguiling swirl of genius and madness, pills and chess. Yes, it was escape, my kind of escape.”)

To watch The Queen’s Gambit trailer, click on the video screen below: