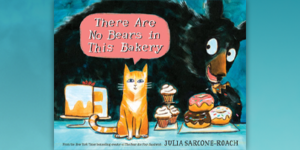 Gail Simmons reads THERE ARE NO BEARS IN THIS BAKERY by Julia Sarcone-Roach (Knopf Books for Young Readers) on Instragram Live on Wednesday, April 1, at 3:00pm (ET).

In THERE ARE NO BEARS IN THIS BAKERY, a wonderfully noir-tinged tale, Sarcone-Roach gives us a funny story of a hungry bear and a smooth-talking narrator in the wrong place at the right time.

After attending the Rhode Island School of Design, Julia Sarcone-Roach made her Knopf picture book debut with The Secret Plan, and followed it up with the highly praised Subway Story. She is also the creator of animated videos, including Call of the Wild, which was featured in indie film festivals and won several prizes.