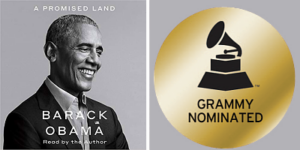 Can a two-term U.S. President be a three-time GRAMMY® winner?

Barack Obama’s “A Promised Land,” one of 2020 and 2021’s biggest-selling audios — and of course also last year’s biggest-selling hardcover and e-book — has been bestowed with a major new touchstone achievement: a nomination voted by members of the Recording Academy®, announced November 23, as one of the five nominees for 2021 “ Best Spoken Word Album” GRAMMY®.

Mr. Obama previously won in the category for the Random House Audio productions of “Dreams From My Father” which he read from his first memoir, and “The Audacity of Hope,” his second.

This year’s winner will be revealed at the GRAMMY Awards Premiere Ceremony® to be live streamed in Los Angeles Monday, January 31, just ahead of the CBS-TV GRAMMY Awards® broadcast that evening.

“A Promised Land,” read and written by the former President, has been a #1 New York Times Audio Bestseller in its Random House Audio edition, as well as a #1 bestselling Crown hardcover and e-book. Produced by our GRAMMY®-decorated colleague Dan Zitt and Scott Cresswell, the production has received much critical praise. “Obama, a master orator, is skilled at keeping the listener’s attention,” said the New York Times Book Review. AudioFile Magazine observed, “President Obama’s distinctively deliberate delivery, angular cadence, and love of words are all fully on display…”