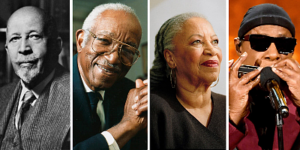 This week Penguin Press announced a new series, Significations, to be created and curated by Henry Louis Gates, Jr., in which important writers and thinkers reckon with the life, work and significance of a range of essential Black American figures. The New York Times heralded the news with a feature article, From Henry Louis Gates Jr., Another Scholarly Megaproject by Jennifer Schuessler.

Significations is a play on the African-American tradition of wordplay known as “signifying” (and recalls Gates’s 1988 book, The Signifying Monkey: A Theory of Afro-American Literary Criticism). Each book in the series will be about 40,000 words, with the first title expected to be published in early 2023. The author/subject pairings include Glenda Carpio on Ishmael Reed, Roxane Gay on Beyoncé, Farah Griffin on Toni Morrison, Tiya Miles on Harriet Tubman, Imani Perry on Stevie Wonder, and Brandon Terry on Malcolm X.

Dr. Gates, known as Skip to close friends and colleagues, told The New York Times, “The idea is to establish a baseline of intellectual reflection on the achievements of creative writers and seminal thinkers who have one thing in common, which is that they happen to be quote-unquote Black in various ways. My goal is for these thinkers and creative artists to become part of the world’s canon.”

Penguin Press Publisher Scott Moyers will be the in-house series editor, and commented, “To state the obvious, a great series is a collection of great books. What’s thrilling to me is the magic of the marriage of author and subject, and the almost sacred trust Skip has given each author to find his or her own best approach. And I think Skip has been so successful at recruiting such a dazzling group of artists and scholars to this banner in no small part because they are so unburdened by a tiresomely uniform framework. Quite the opposite, they’re invited to put their own unique stamp on their subjects, to arrive at their own original forms to best make the significance of these subjects sing. That freedom can be a little scary, but in the hands of authors as great as these, it’s mostly exhilarating.”

For the Significations series, Dr. Gates has brought together a stellar list of esteemed authors and subjects, including:

Jerry Pinkney, one of the most heralded children’s book illustrators of all time, has passed away. The illustrator of more than one hundred books, he had…

Significations is a play on the African-American tradition of wordplay known as “signifying” (and recalls Gates’s 1988 book, The Signifying Monkey: A Theory of Afro-American Literary…

In honor of Penguin Random House's global publication of RENEGADES: Born in the USA, a collection of conversations between Barack Obama, the 44th president of the…