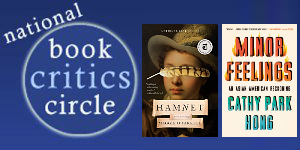 Founded in 1974, the NBCC now comprises more than 1,000 working critics and book-review editors throughout the country, who annually vote and bestow its awards in six categories, honoring the best books published in the past year in the United States.

Congratulations: to Ms. Hong, her editors, Victory Matsui and Chris Jackson, and the entire One World team; and to Ms. O’Farrell, her editor Jordan Pavlin, and the entire Alfred A. Knopf team. We also salute our multi-category 2021 NBCC finalists and their publishers.

To view all of the NBCC Awards winners and finalists, click here.