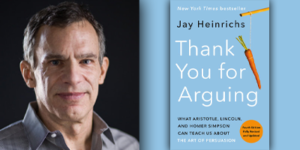 Jay Heinrichs, author of THANK YOU FOR ARGUING, FOURTH EDITION (Broadway Books), will be in conversation with The Great Courses via Facebook Live on Friday, May 1 at 12:00pm (ET).

Now in its fourth edition, Heinrichs’s THANK YOU FOR ARGUING presents a master class in the art of persuasion, taught by history’s greatest professors, ranging from Queen Victoria and Winston Churchill to Homer Simpson and Barack Obama.

Heinrichs spent twenty-six years as a writer, editor, and magazine-publishing executive before becoming a full-time advocate for the lost art of rhetoric. He is Professor of the Practice of Rhetoric and Oratory at Middlebury College and lectures frequently on argument and persuasion, speaking to audiences ranging from Ivy League business students to NASA scientists to Southwest Airlines executives.